Post-Manifesto re-cap and I’m still reeling from the festival’s High Energy vibe. A weekend mash up of Oldskool meets NuSkool under many historical roofs and under the open sky. (RBC Echo Beach) It was such an exciting weekend to look forward to and what an unexpected show it was! (The weather was fabulous!)

The peaceful party vibes continued all 4 days! Shout outs to local lady DJs Dre Ngozi and Nino Brown alongside special guest Selecta Vashtie for throwing down! What I loved was the way all eras and genres connected to Hip Hop legacy with pride and knowledge. All events were spread out all over the city!! Local acts Tika Simone,The Sorority,Sean Leon,Derin Falana,Matthew Progress and Majid Jordan all represented! Truly a pleasure to watch and sing along!

Sitting in to chat with Brooklyn’s Sweetheart Vashtie, we get to see the other side of urban culture and what it actually took for her to build her foundation from the inside/out. Che went from the mundane to the spiritual to the video light perspective. We learned a lot about how she ‘arrived’. Her story’s amazing. In a new age of the music industry, where it doesn’t take much to be notable, we often forget about what it takes to get there. Vashtie talked about Health/Wellness, the Art of Networking, her time at the record label, her travels, her childhood and her heritage. She’s a remarkable young woman. No wonder she’s sought after! Not only did Manifesters walk away with a little bashment but they walked away with some gems for self development. 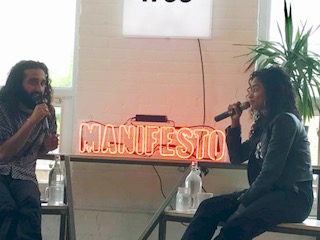 Right now as social media reigns, Che asked about her play-by-play social postings online (prior to her arrival to the T.Dot that weekend.) She talked about her reasons for relying on it so much, “I think it comes from my filmmaking, storytelling side…..I feel like if you’re watching something, you should see it all-the conversations I have with people…..from having a blog…I want to show that I’m like everyone else.I come from a generation where we just don’t share information—and so now making a connection with people with every snap (Snapchat) I feel like I’m showing what’s happening. Back then (in 1998/1999) I felt that Social Media was so strange and I’m coming from a generation where we just don’t share information….but with technology we can talk to anyone anywhere”.

With social sharing permitted at a showcase like Manifesto-all angles of the weekend were splashed all over the web and city. Yes, there were smartphone users all over the concert but the ability to capture these moments helped show the world what’s here and it’s an incredible kind of new beginning.

If Manifesto is one of many Urban Culture fixtures that collectively brought the rest of North America to look at Urban Culture they way they did this June-I’m down. What’s most inspiring is to see the crowds of people at the live concert and parties enjoying all the incredible acts! Toronto is diverse-all ages and all faces really show what a mosaic looks like united in music and I love that.

The verdict: Toronto people love music and support local acts with force. According to Vashtie, (Che didn’t have to twist her arm or nothing) J Canadians are killin’ it with talent. Manifesto you’ve come a long way, Toronto let’s keep going!

It's all about the music and other stuff too.....stay inspired! View all posts by theshineprjct