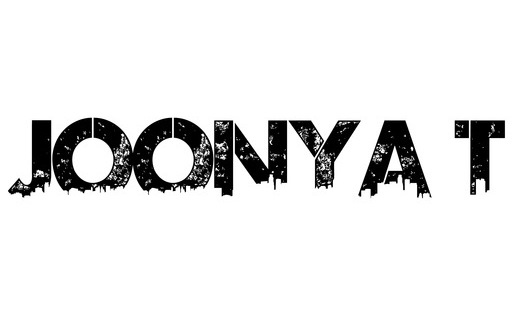 Upon returning to Toronto from Japan in 06-07, I didn’t know where to go. I’d been going to events and show all over Kansai (Japan) and got used to the likes of Danny Krivit, Tim Regisford, DJ Spinna and Louie Vega-respectively. I arrived here (Toronto) thinking that elsewhere could be the only way I’d be hearing great music of this genre.

For months I panicked and felt a little depressed until I discovered the mix CDs and podcast downloads. The best part is discovering the local artists that made up the Toronto scene and immediately occupied myself with the weekly/monthly fixes. One of them was Joonya T.

Currently, you can catch him every first Friday of the month at Toronto’s Andy Poolhall along the College St. Little Italy hub in Toronto! He’s got a unique event scheduled this Caribana Weekend (tonight) in collaboration with Moonraiser Ent (the African house pull) at Mojo Lounge (1305 Dundas St.W.)…and for all of you locals-Mojo’s new home is the former Pacha. This show will be demonstrating something a little different from what we normally get during Caribana here in Toronto. This event features a whole roster of DJs from Africa including female Djs! Toronto and tourists; don’t miss it this weekend! 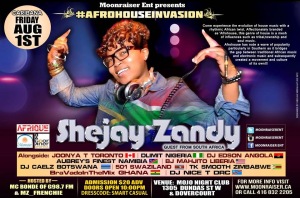 You’ll always find Joonya T spinning in the house music corridor at College or Dundas-he’s never off the grid! You can visit him at http://www.joonyat.com/ to see what’s up, current and happening! Check out this Toronto House Music Mix he just put out to showcase the Toronto flavour! Joonya says about the inspiration for the mix that, “Toronto is very specific about what they take in terms of house music…you rarely  see Toronto people pushing Toronto things…..this is why I started doing the Toronto mixes”.
Check out the mix here! http://www.joonyat.com/2014/07/joonya-t-presents-the-toronto-mix-volume-7/

Shine: Where does the name Joonya T come from? In 2007…all the same cover and just a different colour……his name is from his reggae DJ name!

Joonya T: From the Reggae DJ name I had in highschool. It stayed with me up until now!

Shine: I’m not sure if this is how you wanted to project the “JoonyaT” brand but I’ve noticed that you’ve transferred a hip-hop DJ esthetic to your DJ set style……it’s quite good and has a crossover appeal…what I mean by this is non-house music listeners are pulled in and become fans. What is it about the Joonya T style that’s a little more unique than the next guy? (It’s okay to brag here!!)

Joonya T: Prior to getting into the house scene I was definitely influenced by hip-hop. I enjoyed DJ Clue’s stuff and DJ Kid Capri’s stuff. And as most have noticed;  through my podcasts with Karizma’s material!

Shine: Explain Back Corner Radio’s concept…Where can viewers locate all this info?

JoonyaT: Back Corner Radio comes from the group of friends “The Back Corner Crew”. Myself and friends all into the house music scene would go to parties and enjoy the back corner of the party hollering people in the back corner. Everyone has moved on…everyone has gone through some life changes. The name is truly a way to pay homage to the crew.

Shine: You’ve got your monthly mixes and then you’ve got Back Corner Radio sets…..why the two different ‘projects’?

Joonya T: I started with a podcast and then followed a whole slew of other podcasts…The first one was Dennis Ferrer…..he came in 2007 and I created a mix to help promote the party at the time. I wasn’t affiliated with the event but I put the word out. It got a lot of play……. And I made more mega mixes to focus on specific productions.

Shine: You attended the ADE Festival last year what was that like for you? Anything you took away from that? So so curious. 🙂 Are you attending again this year?

Joonya T: ADE is something I’ll always remember. It was crazy to be in a city with all these people who are truly into the music! Places like Amsterdam and Japan take in the various music scenes in a whole different way. Places in Europe, Asia and specifically Africa promote house and Electronic Music the same way we promote Pop Music. Billboards at the bus stop with celebrities and promotional flyers are places all over places like the airport……this was a very different experience for me!

Shine: I like the examples you mentioned it shows a little more than what we think we’d notice and understand about a country’s relationship to house/dance music in other cities in the world.

Shine: Making international rounds must be amazing! (Travelling being the best part)- What’s it like explaining to the people you meet (fans and industry heads) that you’re from Toronto? How do you explain the Toronto (house/tech/dance scene)?

Joonya T: First of all this was made possible by my good friend and confidante in the industry (Pascal Morais). He had been talking about it and encouraged me to head over there. I’m not very much in people’s faces….I’m sociable but I don’t go around to chat with people….I sort of observe and feel my environment. It was little nerve-wracking but once I met everyone I had an amazing time!

When I speak of Toronto, I always catch myself talking about a vibe…..certain tracks set things off….in Toronto. There isn’t a young scene coming up to replace the older heads. The vibe or feel is what we still have and it’s celebrated in a specific way here in (Toronto).

Joonya T: In the beginning, (2007) when I started all this, there wasn’t really a Facebook.  Everything is social. You get the people who go out based on whose promoting. I used to burn CDs . Word-of-mouth reigned and flyers were part of the promotion. Right now…people are not only on Facebook but on other outlets. Technology has afforded me the extra memory to extend a mix past the usual 80 mins! House music runs differently than other musical genres….producers are trying to make the same kind of money they used to make….. Everything was still underground pre-2007 and even still I always hear good music and wanna know what tracks are being played. I used to wonder….Does anyone else know about this?… The underground was truly underground. Often, you do hear House heads talk about ‘back in the day’…..those heads are now getting older. Trends are slowly starting to change! It’s rare to have a 200+ sold out party but small events that collaborate seem to work now in Toronto. A lot of the bigger events are happening on the Tech side…DJs come to Toronto two times a year instead of once. Ask anyone in the soulful scenes We laugh about it. They don’t drink….usually I think it’s because they are older. When I started I was always doing parties on my own, now I collaborate with other DJs… My philosophy now: You gotta make your way or knit your own piece of sweater…..its okay to always push brands at the same time!

Shine: I’ve noticed you’ve concentrated on your online media presence and I’d have to say its VERY good! Who’s your audience?

Joonya T: I’ve got a background in Marketing and want to grow the brand so I’ve remained consistent with my name, image and podcasts. I’m trying to pull in a younger crowd.  Frankly speaking, South African supporters and listeners have always been my audience. Next up are supporters in Europe and following that are fans in the U.S.! They consume more dance music than the average music lover!

Shine: What are some parting words you’d like to leave us with today?

Joonya T: Just like at the end of every show, I’d say to them…Love what you do what you love… that’s a mantra I live by and hopefully my listeners can grab a little something to add to their day when they tune in to Back Corner Radio!

We had so much to discuss it was pretty awesome to talk about his expansive projects!

For all you socially savvy people you can follow Joonya T’s digital footprints here: