Bravo, bravo, bravo! I had a ball at this show! I found out last-minute and was pretty excited to see her live! I didn’t get a chance to see her the last time she was in Toronto….Here’s a little story about when I found her music….

I was in Japan in 2003. I strolled into a massive Tower Records in Downtown Osaka. I used to run in there to purchase vinyl for my weekend gigs but I also went in there because I missed music I could easily hear at home! Japan has this thing about separating their music by genre.

Japanese are HUGE purveyors of music and devote full floors and/or sections to musical genres. I was a little put off when I found the ‘Black Music’ section (this is what they call RnB, Hip Hop, Soul, Reggae etc.) But DAMN it had its own floor!!!

I looked around and they had a huge display with multiple magazines and articles about Teedra Moses. I looked at her dress and shoes on the CD cover and first thing I thought was ‘classic 80s look….I’m buying this’! I took ‘Complex Simplicity’ home and that was it! The album hadn’t been released in Canada yet so I brought it home with me the following year when I came home for Christmas……it got  scratched and my sister took it…..it was hers.

Ask anyone who was there last Saturday at Revival and they’ll tell you- she’s got this ‘it’ factor. Her music is heartfelt and captures a point in time where music was REAL. She sings about love and heartbreak in a very pure way; almost matter-of-factly. She’s fierce and sweet at the same time! With songs like ‘Complex Simplicity’ and ‘Caught Up’, ‘R U 4 Real’, ‘Kisses Never Tasted So Sweet’, ‘All I Ever Wanted’ she just hits that sentiment called love…..The crowd sang along both men and women…! During the show she paid ode to ballad greats Evelyn Champagne and Caron Wheeler…..dope!

It’s unbelievable that Complex Simplicity didn’t sell when it debuted in 2004 but as per last Saturday……the proof is in the crowd’s presence. She’s considered Indie as she released her first album with TVT Records. Most recently she is signed to rapper Rick Ross’ (Maybach Music Group). Super kudos to CMW(@CMW_Week), The Main Ingredient (@TMIParty) for bringing her out here!Homegrown artist (Toronto) Leila Dey warmed up the show nicely. She’s got a gorgeous voice! Complemented the Teedra Moses show!

Moses is a classified Indie artist, you won’t see too much of her but when you find her stuff…..you’ll be blown. Teedra Moses Soundcloud right here. DO IT.

For my two-step heads- there’s a (Kaytranada Version) of ‘Be Your Girl’. Well selected set. She commands the stage. Her styling is on point. She’s got the pipes.She’s Old School, she’s Nu Skool!  Her wing man was quite the vocalist. You just had to be there! 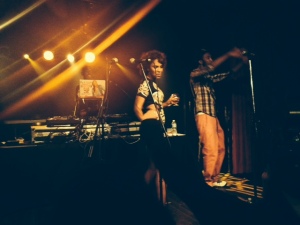 Back to our regular programming.

Published by the SHINE prjct

It's all about the music and other stuff too.....stay inspired! View all posts by the SHINE prjct

2 thoughts on “Teedra Moses – Cognac and Conversations – Live! – Revival TO – The Main Ingredient”